Do hoverboards catch fire? Are They Safe in USA 2021? 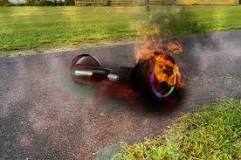 A self-balancing scooter fire can destroy an entire house
Nearly all hoverboards use lithium-ion batteries because they are small, but store a lot of power. Unfortunately, they are also prone to overheating and explosions.

Hoverboards were officially created in 2013 and sold quickly to people eager to hit the roads and ride fast. The exact inventor remains controversial (both China and the United States are involved), while the invention itself also has its fair share of problems. Hoverboard safety issues revealed themselves almost immediately after the toys came out, prompting retailers like Amazon to pull them from the market.

Hoverboard recalls became commonplace in 2016 and 2017. So, are hoverboards safe? Has the hoverboard combusting problem been solved? In this article, we’ll go through a timeline of recalls, reasons why hoverboards have gotten significantly safer, and how to avoid hoverboard fire hazards on your own.

Hoverboards have, however, been a subject of controversy, with some states outlawing their usage on public pavement or other non-road terrains. The reasons vary depending on the state, but the consensus is that they're still a little too risky to be used as a personal transportation device.